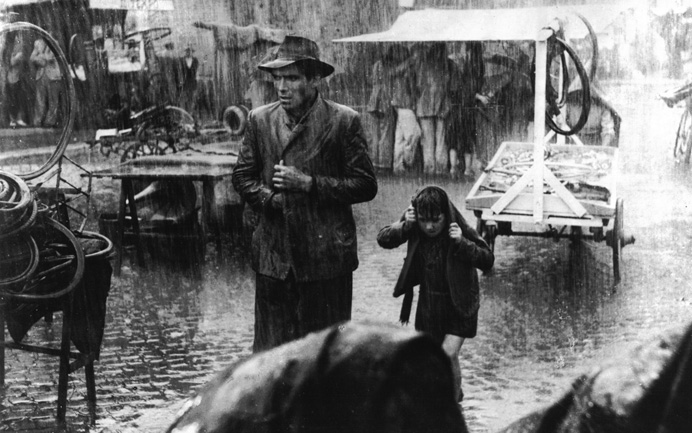 As far back as human civilization can be traced, there have been stories about the end of the world. The Norse had Ragnarok, Christianity has the Rapture, and the Mayans had 2012.

Some have argued film as a form of modern mythology, and as anyone who has been to a movie theater in the past decade or so can tell you, modern film is chock full of apocalyptic stories. It’s only right—every mythology needs its ‘end of times’ tales. They tell a lot about the culture that produced them: what their fears were, and how they perceived death.

While there have been films dramatizing the end of times as far back as the silent era, the apocalyptic genre picked up serious traction in the years following World War II. This was, of course, all thanks to the atomic bomb. The threat of nuclear weapons wiping out humanity inspired a slew of films imagining what would happen after the button was pressed, such as Day the World Ended and On the Beach.

The Cold War also bred fear of society collapsing due to economic and environmental factors, which led to post-apocalyptic films like The Road Warrior. These were stories about heroes and anti-heroes wandering the post-societal wastelands in search of food and water. Often, such as in A Boy and His Dog, these barren, desert landscapes were the direct aftermath of nuclear war.

These movies are fun and exciting, but often thought-provoking as well. The closer to the modern era we get though, the more we see the apocalypse being mined purely for entertainment. After all, what’s more cinematic than the complete and utter destruction of all mankind? Blockbusters like Armageddon, The Day After Tomorrow, and I Am Legend all tackle the topic with varying ideas of how the world did or will end. But the most important thing to audiences is that they’re big. Today, the end of the world must be a spectacle.

In contrast, independent filmmakers have made smaller movies on the subject—‘personal apocalypses’ so to speak. Lars von Trier’s Melancholia is a film where its protagonist’s clinical depression is manifested physically as a massive blue planet on a collision course with the Earth. It’s not about the destruction of the world, per se—it’s about the people being destroyed.

All these different interpretations and approaches only begs the question, what is the apocalypse?

Does the apocalypse need to be literal? Melancholia certainly depicts it literally, but it’s also a metaphor—it’s only on screen to give us insight into the mind of its protagonist. We never see the outside world. We don’t have a scene like the opening of Armageddon where comets rain down upon New York City, or shots of frozen bodies like in The Day After Tomorrow. The outside world doesn’t matter—only the bride and the people in her life do.

If we view ‘the apocalypse’ as the end of one’s own world, rather than the entire world, the genre widens. We can examine films with non-apocalyptic plots, but apocalyptic viewpoints.

With this in mind, doesn’t Vittorio De Sica’s Bicycle Thieves seem rather apocalyptic? For those who haven’t seen it, it is the story of an impoverished man in post-war Rome, desperately seeking a job so that he may feed his family. In a stroke of luck, he is offered a gig hanging movie posters around Rome, but the catch is he needs his own bicycle.

His bike is at the pawn shop, so he and his wife sell their bed sheets in order to get it back, and for a brief period, it seems as though Antonio’s troubles are over. But, on his first day of work, his bike is stolen from him.

The police being powerless to do anything, he sets out with his son, Bruno, and searches Rome tirelessly to find the thief and get the bike back. Eventually, out of desperation, he attempts to steal another person’s bike, but is immediately caught. The crowd takes pity on him and he walks home in shame towards an undetermined future.

It’s a film about devastation. Right from the beginning we are shown images of the decrepit buildings and slums of post-war Italy. It looks post-apocalyptic, like the wastelands of The Road Warrior and A Boy and His Dog, but those films’ landscapes are the results of fictional wars—Bicycle Thieves shows the very real wasteland that resulted from World War II.

Then, we have the story—it’s about a man and his son navigating this strange, ravaged city, seeking the resources they need to survive in the new post-war world. Furthermore, his enemies are the other survivors. Much like The Road, where a man and his son travel through a wasteland avoiding packs of cannibals, Antonio and his son face off against their fellow Italians who all too quickly gang together to fight somebody who could easily be one of their own. It’s another impoverished man who steals Antonio’s bike, and when he is found out, his neighbors crowd around Antonio, as if they were zombies overpowering an exhausted soldier, emotionally tearing him to shreds. By the end, we are inside Antonio’s head, feeling his shame and defeat. His life, as he knows it, is over. His world has ended.

We could speculate endlessly about what happens afterward: perhaps the foreman has a different job for him, or perhaps he and his family starve to death and die shivering on their sheetless beds, huddled together for warmth. De Sica ends the story before any of that, because anything further is unnecessary—we have already witnessed Antonio’s death. He has lost his job, his status, the respect of his son, his own self-respect, and most importantly, the bike that symbolizes all of it. What more does he have to live for?

We are given the same ending as A Boy and His Dog—Antonio and his son walk home, knowing nothing else but that they will continue to live, just as Don Johnson and his dog walk off into the desert, not knowing what will happen next, only that they have survived another day. Both are desolate images—life will continue, but it will be miserable.

Italian neorealism and post-apocalyptic films have a surprising amount in common. They tell the same stories of war, oppression, and poverty. The Nazis in Rome, Open City serve the same exact role as Lord Humungus’ gang in The Road Warrior. It perhaps goes against the tenets of neorealism to use lavish sci-fi metaphors instead of harsh reality, but they are coming from the same soul and preaching the same morals.

It’s not only that they follow in the tradition of the apocalyptic genre—they set the ground for it. In a time where Hollywood movies required villains to get their come-uppance and people wanted happy endings for the heroes, De Sica and Rossellini and the rest of the neorealists weren’t afraid to show a more pessimistic reality. Only after them were the Americans willing to showcase the same horrors—but even then, only through the lens of science fiction.

Neorealism lived a short life. By the 1950s, the economic situation in Italy was improving, and cheerful American movies were preferred over the grim images of poverty. It’s around this time that Americans started making movies like Day the World Ended—all the pain and agony of a film like Bicycle Thieves, but made fun by throwing a monster into the mix. Realism became metaphor. And metaphor gave way to spectacle. An ironic fate for a doom-spelling genre.

2 thoughts on “‘Bicycle Thieves’ and Other Apocalyptic Movies”