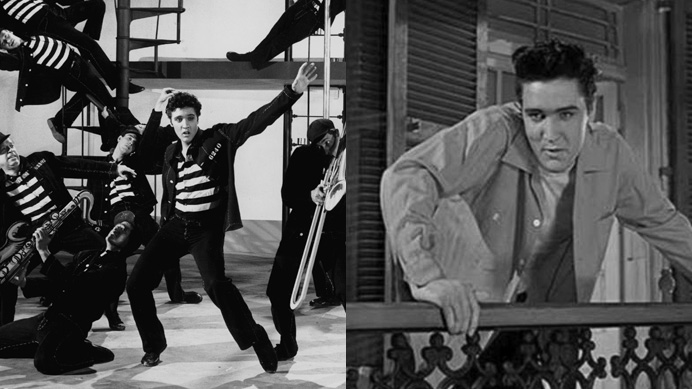 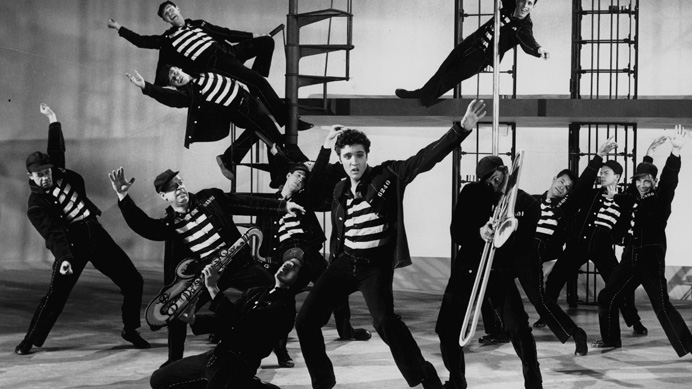 Woah, okay, Elvis just got real. This is like the mirrorverse version of Loving You—no really, it came out the same year. It’s a much darker origin story for Elvis that gets surprisingly violent considering it’s mostly an excuse to showcase pop music.

Elvis plays Vince Everett, a hotheaded young man who has major anger issues that ends up beating a guy to death with his bare hands because he didn’t like how the guy was treating some random chick. While in the slammer, Vince gets a bad buzzcut that somehow makes him look  five years younger and learns how to play guitar from his ex-country musician cellmate. Realizing how much it pays, Vince decides to pursue a career in music once he gets out of jail. With the help of an eager promoter (Judy Tyler)– and after breaking a guitar over a table and slapping a record executive in the face– Vince finally makes it big. However, it’s lonely at the top when you’re kind of a douche with a big chip on your shoulder.

Jailhouse Rock is seriously dark! Goodbye good-guy Elvis—now he’s straight up lecherous and vindictive, with uncontrollable bursts of anger. I kind of wish this went even darker though, like maybe throw Robert Mitchum in there as the other prisoner, or have Scorsese travel back in time and direct. But as is, there ain’t no sunshine in Jailhouse Rock—Elvis kills a guy, punches a cop, shits on Jazz music, uses words like ‘hell’ and ‘sexy’, and is, gasp, in the same bed as a lady in the ’50s! It also takes until Elvis gets literally punched in the throat and given a tracheostomy for him to reconsider some of the choices he’s made in life—I’m tellin’ ya, this is intense shit.

What’s sort of interesting about this movie is how Elvis’ music doesn’t seem like the focus. Whereas with the last two you were basically holding your breath until he sang again, with Jailhouse Rock you genuinely get into the  anti-hero vibe. I was struck by the fact that after Vince is put on national television for a sort of prison talent show (P.S., can we bring this back to television? That’s reality TV gold) he’s shown receiving hundreds of fan letters from women that are just straight up like ‘Hey, I saw you in prison, here are my measurements, let’s meet up when you’re done with the whole  jail thing.’ I know that happens in real life occasionally, but dang, teenage girls—you can do better.

Also, this is now the second movie in which Elvis is discovered by a woman who immediately makes it her job to promote him. I’m gonna keep tabs on that. There’s definitely an “older” woman taking care of Elvis theme in these films.

All in all, Jailhouse Rock is enjoyable, well-paced, and made Elvis seem like a terrible person. Though you do get to see him work hard labor without his shirt on, take a lady on a date to watch drag racing, eat a burger, and dance in a now iconic jailhouse outfit, so it’s definitely the most Elvis-y Elvis movie so far.

Best song:  It’s gotta be “Jailhouse Rock” staged as a big elaborate made-for-TV performance in which Elvis tries his best to coordinate his dancing and lip-syncing and doesn’t really succeed. This scene is apparently known as Elvis’ greatest moment on film, but I don’t know, it’s not that impressive honestly. Elvis looks like he’s making it up as he goes and everybody else is just following him. The movie covers for it by having a character say at the end, “Let’s re-shoot, some dancers were out of sync”, and whether or not that line was always in there, or added after the fact because the performance was sub-par, it’s telling.  The imagery is iconic and the song is great, I’ll give you that. 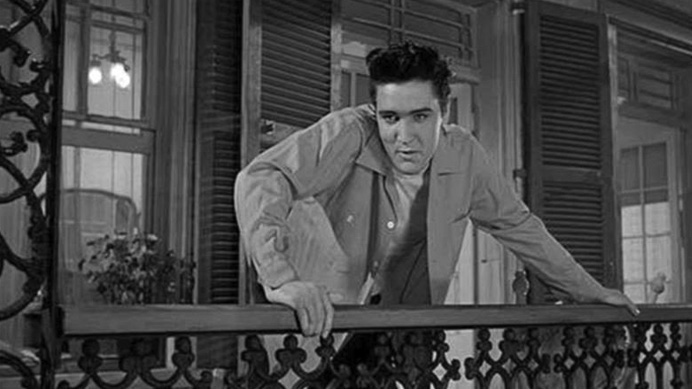 Holy crap! Here we’ve got an actual plot, we’ve got character motivations and development, an incredibly solid musical score, and some genuinely good acting! Maybe I’m just this impressed because of the substandard quality of the last three, but I think I may have just watched a legitimately great film!

Danny Fischer (Presley) is a hardworking teenager struggling to keep his family afloat and maintain passing grades. With his mother dead and his father wallowing, it’s up to Danny to support the family. However, after flunking high school a second time, he finds himself in a position to take a job as a singer at the King Creole club. Unfortunately, he also manages to get put on a watch list by local mobster and rival club owner Maxie Fields (Walter Matthau), the type of guy who won’t take no for an answer. King Creole follows Danny as he juggles his family, his job, and his two women—the call girl (Carolyn Jones) and the girl-next-door (Dolores Hart)—all the while grappling with his own search for direction and self understanding.

I didn’t realize until afterward, but I wasn’t surprised to learn King Creole was directed by Michael Curtiz—of course best known for directing Casablanca. This was supposedly Elvis’ favorite role, which makes sense, since the character is sympathetic and recognizable. Fischer’s that sort of impatient kid who would’ve benefited from having stronger parental guidance, but despite his slightly unorthodox ways of getting ahead, managed to keep afloat with his strong sense of morals. I can easily see this being something Elvis—as a person, not an icon—could empathize with, even if I’m perhaps projecting my own impression on him. Either way, he really kills it, acting-wise.

What’s great about this movie is how well everybody and everything fits. Elvis doesn’t overact this one at all, plus his music fits seamlessly with the plot. There’s really no music relief breaks—instead, he sings in appropriate situations and the songs move the story along. The plot itself is pretty great—it’s a sad story about a talented kid who’s been dealt a bum hand in life. There’s a real emphasis on how growing up poor is an incredibly hard obstacle that dictates the direction of the rest of your life—even somebody with unquestionable talent has no guarantees in life without the money and time to back it up. But ultimately, King Creole isn’t a pity party; Danny holds his own, and it throws just as much cynicism on those that naïvely think they can plan their futures–such as Nellie (Hart),who’s ready to jump blindly into marriage, or Danny’s father (Dean Jagger) who has everything in place except a backbone.

The biggest faults of this movie are the comparatively flatter female characters—though, the sad helpless call girl who doesn’t know how to get out of the hole she’s dug and the naïve, marriage-obsessed, bright-eyed innocent are believable enough for the time period. Worse I think is the fact that there’s like only three black people in all of Louisiana according to this film, and all they do is sell street food. Fairly insulting, since just about all of the music in the film is straight up lifted from black artists, but hey, it was the ’50s, who’s surprised.

All in all, a great film. Not really Elvis-y, but that’s part of why it’s really well done.

Best Song: “Trouble,” definitely. A really satisfyingly shot scene in which Danny is first coerced on stage by Maxie, who suspects his supposed singing talent is actually just a lie. The song is shot perfectly—the camera’s situated looking up at Danny on stage from the side, as if it were seated across from Maxie watching the entire scene unfold. And the song itself is badass—Elvis starts out with his signature low-voiced talking, interspersed with trumpet crescendos until it all busts loose into Elvis tearing it up vocally and swinging his hips to match. Also pretty satisfying to watch Maxie wipe the egg off his face.