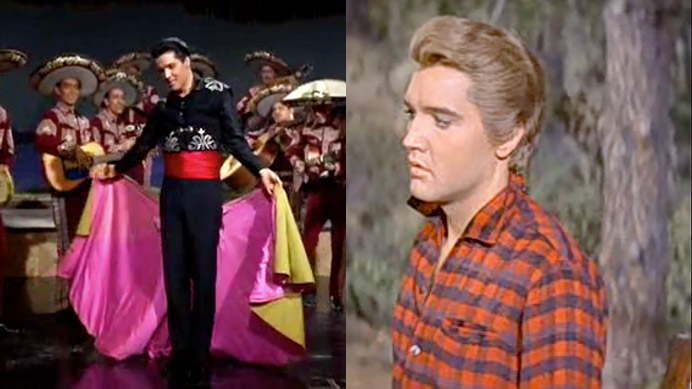 I can see the boardroom meeting now:

“Listen men, we need a fresh spin for these Elvis movies. Cranking out ‘[insert occupation] Elvis’ films three times a year is all good and fine, but we need to be one step ahead—this rustling overseas from England is making me nervous.”

“Well sir, themes are still popular, and heck, if it ain’t broke, why fix it? Why, the solution is more themes, of course!”

Cut to: Fun In Acapulco. 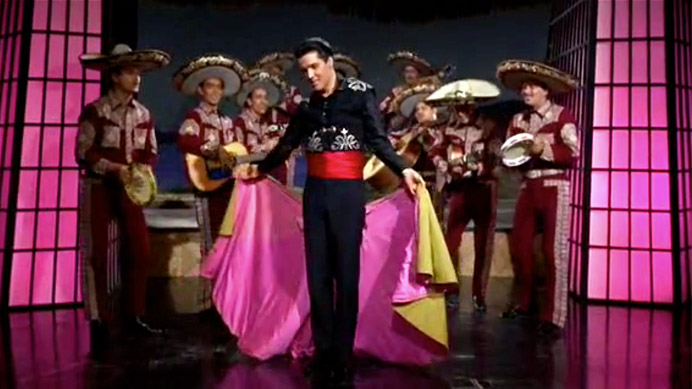 Mike Windgren (Elvis Presley) is a captain of a private yacht who gets fired because of his boss’ sex kitten teen daughter, and is forced to get a gig as a lifeguard by-day, and a lounge singer by-night, all the while trying to choose between two women and reconcile his deep, dark past as… an acrobat in the circus.

No, I’m not kidding.

The movie starts with Mike getting fired after the owner’s obnoxious tween daughter, who keeps aggressively hitting on him, falsely accuses him of taking her to a seedy bar and buying her alcohol. I gotta pause for a minute here though, because seriously, what’s with these sexual predator teenage girls in Elvis films? There’s even a flat out up-skirt shot of this kid in her bikini within the first five minutes. And, after about ten minutes, she’s we never see her again. This sort of shit is why Nabokov wrote Lolita. And ironically, even though Elvis is always turning these girls down for being ‘too young’ in his films, in real life he allegedly did have a thing for teenagers. But, it’s not like he’s in control of the camera, so there must be some even creepier shit at work here.

Anyway, after he starts singing at a bar, a very young kid named Raoul (Larry Domasin) comes up to him and promises that he can get him a job. Mike decides sure, I may as well trust this seven-year-old, and decides to meet up with him the next day. It turns out Raoul pretty much has a cousin in every hotel in all of Acapulco, and immediately Mike gets hired as a stand-in nightclub singer. Mike is insistent that he also gets a job as a lifeguard, so he can practice on the high dive. We find out via flashback that he used to be part of a trapeze act, but after a terrible accident involving his brother, he now has a crippling fear of heights.

Also working at this hotel as a lifeguard just so happens to be Mexico’s champion diver—Moreno (Alejandro Rey). Immediately the two clash, specifically over the fact that Mike pretty blatantly starts hitting on Moreno’s girl, Margarita (Ursula Andress) who also works at the hotel. Oh, and Mike is also dating famed Mexican bullfighter Dolores Gomez (Elsa Cárdenas) whom he met at the first bar.

The rest of the film revolves around Mike trying to get the highest paying gig as a singer with his seven-year-old manager; standing on top of the high dive and not jumping off; juggling his blonde European “Princess” and his fiery Mexican bullfighter girlfriends; punching the lights out of Moreno, and then having to take his place diving off the 136-foot cliffs of La Quebrada in front of hundreds of people.

I found this great 1963 New York Times review of the film that starts by basically saying ‘Well it’s better than those stupid ugly goddamn Beatles’. Jokes on you, Howard, because A Hard Day’s Night comes out a year later and blows this shit outta the water. That said, I agree with his assessment of Elvis as “relaxed and personable”—he’s easily the best actor in the entire flick, which in this instance, isn’t much of a compliment. Can you believe this was the big follow-up for Urusula Andress after her infamous bikini scene in Dr. No? I can, because she’s a terrible actress and spends most of this movie in a bikini. Elvis, on the other hand, genuinely does a good job as nice-guy-with-a-wandering-eye Mike, and looks great doing it in multiple matador outfits—the highlight being one with a hot-pink-and-yellow silk cape.

Much more interesting than this crazy movie is the fact that Elvis was essentially banned from Mexico at the time they were shooting this! They had to hire a double to shoot his wide shots on location, and the rest of the scenes with Elvis were shot in a sound studio. Now, if you’re anything like me, you’re like, ‘why the hell was Elvis banned from Mexico?’ Then you remember the whole conservative push that was happening around the world to ban Rock ‘n’ Roll as the devil’s music, and you’re like, ‘oh yeah, makes sense.’

Apparently though, the root of the Mexican government’s hatred of Elvis came from alleged riots that took place during screenings of King Creole and G. I. Blues that lead them to an all-out ban his films. A separate Mexican news outlet also reported Elvis having made racist comments about Mexican women. Elvis directly denied these, and they are believed to be false. More than likely, Mexico just wanted to undermine the influence of Elvis’ American modern values on its own youth by throwing Elvis is a bad light before he became symbol of rebellion. Unfortunately, this propaganda did apparently spread throughout Mexico and there was a backlash against Elvis for it. He was also accused of being a homosexual transvestite based on how he moved and dressed—the latter of which is hilarious to me considering Elvis basically just wore traje de luces outfits for the rest of his career. But I digress. (For more information on this, there’s a whole book on it called Refried Elvis: The Rise of the Mexican Counterculture by Eric Zolov.)

So anyhow, the movie on a whole is pretty ridiculous. I also was not a fan of the yellow hue that they cast over every scene. Did I just get a bad print or what? But, in the end, I might be feeling generous because while this movie was definitely one of the corniest I’ve watched, it didn’t try to be anything it wasn’t, and at least the setting was interesting.

Best Song: Elvis straight up lets loose with “Bossa Nova Baby,” and it is glorious. Seriously though, if you only click one song I’ve posted thus far, let it be this one. His legs are on fire—Elvis has never danced better on film. A pretty easy choice seemingly, though I’ll admit it was a tough, due to the fantastic form-fitting bull fighters outfits Elvis wears in the other songs. 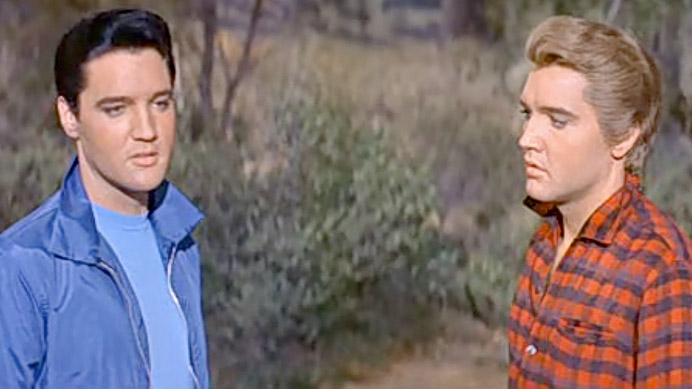 Well, I don’t know what I expected, but boy was this one a stinker. You’d think having two Elvises would make this double-great, but alas, not.

Second lieutenant Josh Morgan (Presley) is roped into going back home to the Smokey Mountains to try and convince his hillbilly cousins to rent their land to the government so a missile silo can be built. Once he arrives, he immediately runs into the spitting image of himself in blonde, distant cousin Jodie Tatum (Presley) along with the two Tatum sisters,  Azalea and Selena (Yvonne Craig and Pamela Austin). The sisters immediately fall for Josh and promise to help him convince their Ma (Glenda Farrell) and Pappy (Arthur O’Connell) to let the government do its thing.

Between Pappy’s moonshinin’, Ma’s home cookin’, soldiers outta their element, those crazy Tatum sisters fightin’ for Josh’s affections, Jodie’s penchant to wrassle, and the group of a dozen partially clad women from the Kittyhawk clan who literally chase down men in an attempt to get pregnant, hijinks ensue!

Kissin’ Cousins has all the luster of Lee Marvin’s singing voice in Paint Your Wagon mixed with the complexity of Elmer Fudd. They clearly cranked this one out in a last ditch effort to keep up their at-least-two-a-year pace.  However, for all its badness, I think Kissin’ Cousins gets a bit of a bad rap—the problem is not that it’s unaware of itself, the problem is that it’s just boring.

The movie is cartoonish, and obviously meant to be—Captain Salbo literally turns green when he finds out he’s eating possum tails and owl gizzards. This could have been great—a live-action cartoon starring hillbilly Elvis genuinely sounds like a movie I want to watch (I’m thinking something along the lines of Raising Arizona). But unfortunately, they just drop the ball for the most part. Once in a while the movie has a good line, such as Jodie’s first line after encountering his doppelganger: “What’re you doing with my face?” But, for the most part, it’s just barefoot mountain men, G-rated horny women, and low-IQ jokes.

I will also say that the Kittyhawk horde ravenously abducting the entire army (including an eyebrow-raising moment as Elvis squirms to get away while another officer tells him to “just relax and enjoy it”) might be some proto Monty Python shit– we’ll have to ask John “Shot Context” D’Amico about that one. By the way, one of the Kittyhawk sisters is played by Ronald Reagan’s daughter Maureen! I’m sure he was proud.

Elvis is reported to have initially refused to leave his dressing room with the blonde wig on because he thought he looked stupid—personally, I wonder if it had anything to do with anxiety over his stillborn twin brother Jesse. Not unlike the memory of his mother, Elvis felt continually haunted by his dead brother throughout his life. I’m likely reading too far into that, but hey, it’s not too out there of a theory.

Best Song: The music in this is straight up terrible. They had a real chance to do some genuine bluegrass or country music, but just dropped the ball completely. Honestly, it’s surprising to me that Elvis wasn’t more put off by all the lazy Southern stereotypes and inadequate music.

It’s a tough choice for best song—the opening number is laughably bad, plus there’s a dopey ballad Ma sings with a bloodhound as vocal backups. I’d say “Once Is Enough,” about defeatest laziness, was probably my favorite song, but I think I’ll also have to include the “Kissin’ Cousins” finale song just so you can see how poorly this movie was shot. If you look closely, you can clearly see the face of Elvis’ double.