Alright so whenever I go on Netflix Instant I just sorta pick random movies from my queue, try them for a few minutes, and then if I’m not feeling them moving on to another until I finally find one I don’t hate, and then I watch that one. This ‘Netflix Quickies’ thing is basically a series where I just talk about movies I decided not to watch after some amount of minutes and explain exactly what turned me off about them. Here goes:

This one really could’ve been great. The story is great. Instantly fascinating.  However, the actual storytelling, and the presentation, is extremely grating, and shows no confidence in how fascinating the story is.

It’s really not hard to tell a compelling story if your story is naturally compelling. Really, all you have to do is get out of the way of it and let it do its thing. The best documentary filmmakers know this. Werner Herzog, Berlinger/Sinofsky, Steve James, the list goes on. All of them take a very simple, straightforward approach that doesn’t insult your intelligence, and doesn’t insult or exploit its subjects.

The Imposter an over-stylized mess of a docudrama. Its clear Bart Layton is a fan of Errol Morris, and it’s also clear that he doesn’t understand him, and doesn’t understand what makes a movie like The Thin Blue Line work. Layton lacks the taste buds required to know when he’s overcooked his dish.

How did he overcook it? Well, first of all, the move is 2.35:1. That, already, is a mistake. No documentary should ever be 2.35:1. They should be 1.85:1 or 16:9 or 4:3 or 1.66:1. 2.35:1 is just not the right aspect ratio for the genre. It’s too movie-ish. It makes everything look fake. Add to that the fact that he’s applied hack-y filters in post to all the footage. As a result, when you’re seeing one of the documentary subjects just sitting in their home, talking about what happened, you can’t connect to anything they’re saying. There’s no personality to their living space, due to the stupid filters. It’s a slice of life with all the life removed.

Even the audio is ruined. It’s over-processed and strange. Everyone’s voice sounds weird. I guess they wanted to remove any and all noise or room tone, so they used noise reduction like crazy. The result is that nobody has any personality to their voice and everyone sounds same-y.

Lastly, the dramatic reenactments are completely unnecessary. This did not need to be a docudrama. Most docudramas don’t. Most docudramas suck. This should’ve just been people talking, telling the story. It really is a great story. Basically, just look up the story online, and skip the movie. Although, definitely watch the first 10 minutes or so of this if you want to learn how not to make a doc. 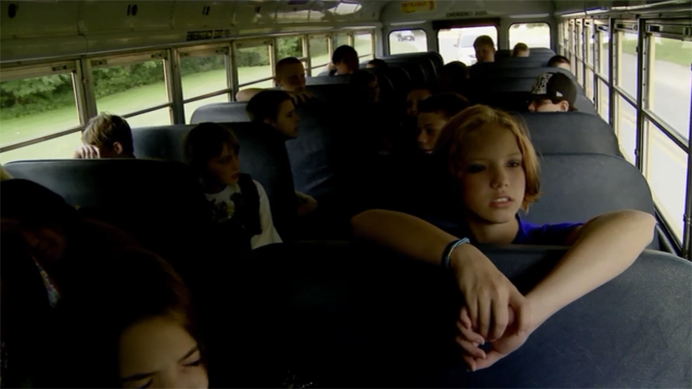 Another ‘how not to make a doc’ doc, full of unnecessary artifice. It tries so hard to be important and timely, and cover so much, that the focus is all over the place, and nothing is covered properly. In just the first 15 minutes, a dad tells a sad story of his son committing suicide, then he’s cut off so that we can meet some unrelated dorky spectrum-y kid, then we get a title sequence where we hear a choir singing ‘Teenage Dirtbag’ over fly-on-the-wall footage of kids riding a bus and looking out the window all thoughtful-like, and then we follow an incompetent assistant principal hurrying around school. There’s no flow whatsoever. It’s all just tiny tastes of things with no through line. It’s ironic that a movie about people who don’t respect other people does not at all respect its subjects or their stories enough to let them truly speak. 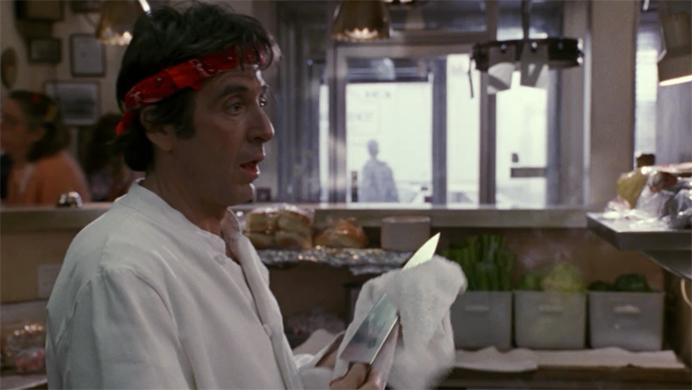 I’m a sucker for anything and everything Pacino. Such a guilty pleasure. I find him hilarious in everything. His overacting rules. Scent of a Woman is one of my favorite comedies. The funny parts are funny and the unfunny parts are unintentionally funny. I watch it maybe once a year, around Thanksgiving.

I can usually make it through any movie he’s in, but man this one is grating.  I hate movies that try so hard to be ‘New York’ that they are anything but. Nothing in this one rings true. It all feel so damn fake. Not just fake for now—fake for the 90’s, too. I grew up in New York in the 90’s, and it was nothing like this. It’s as though someone heard about a bunch of New York stereotypes, but had never actually visited the city, and decided to write a story set there.

However, there’s a funny part where Pacino is chopping celery and talking about Shakespeare and being all Pacino-y and wearing a crazy red bandana. That part is worth watching, if you like Pacino being all silly and overact-y. I might actually revisit this one sometime in the future to zip through and see if there’s any more good Pacino parts. But I don’t think I could ever watch it straight through. Everything else besides him is too grating. 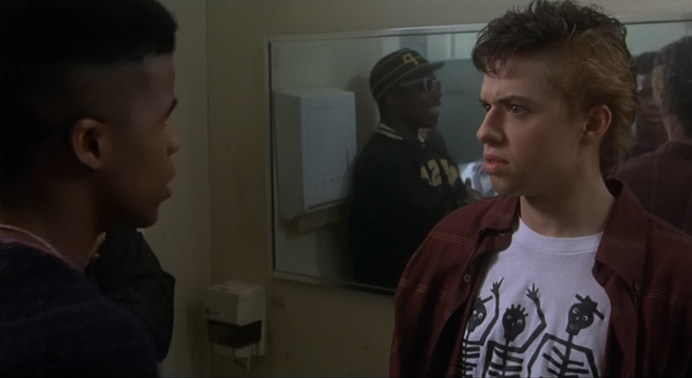 Hiding Out (1987)
Directed by Bob Giraldi
Written by Joe Menosky and Jeff Rothberg
98 min. (Gave up after 28 min.)

I really wanted this one to be good. The premise is so wacky and 80’s. Basically, it’s Jon Cryer playing a stock trader who mob guys are trying to kill, so he escapes and decides to pose as a High Schooler in a small town. And while he’s a High Schooler, he crushes on a girl who goes to the school. Sounds fun, right? Wrong.

This movie is a damn boring mess. It takes way too long to get going, and then when it does, it’s still boring as shit. And not at all funny or entertaining. Nothing happens in this damn movie. The only fun thing is that Cryer, to blend in as a High Schooler, basically makes himself look like his character Duckie from Pretty in Pink. But his character in this one lacks all the zest of Duckie. Here, he’s basically a poor man’s Adam Goldberg. I don’t even like Adam Goldberg, but I woulda preferred him in this movie to Cryer, because it would’ve fit.

Give this one a shot if you have an extremely high tolerance for terrible 80’s High School movies. I couldn’t make it through it, but if you’re a nut for the sub-genre, you might dig it. Personally, I’d much rather just re-watch Three O’Clock High.

I avoided this one for a really long time. Lars von Trier is very hit or miss for me. I adore Dogville and Manderlay and Breaking the Waves, but I haven’t been able to get down with his other stuff. Most recently, Melancholia, which really, really rubbed me the wrong way, and I gave up on not too far in. I hear that it changes and gets a lot better as it goes on but whatever. Maybe I’ll try it again one day. But a movie like Antichrist makes me really not wanna, and basically just steer clear of Trier for good.

The fucking opening of this, with the black and white, and the slow motion, and the snow and everything, feels like what a jock might assume all art films are like. It plays damn-near like parody. Is that the point? Parody? Satire? Is that the point of Melancholia too? I have no idea. I doubt it. Ultimately, I don’t care though. It’s all just so damn grating and unbeautiful to me that even if it were parody, I probably couldn’t enjoy it.

The problem with art films is that if you don’t like the art of it, you’re fucked. And I don’t mean that as a bad thing, necessarily. Hell, I’m an ‘art filmmaker’, I guess. My films are divisive and love-it-or-hate-it or whatever. So I’m definitely not dogging art films. But basically, art films, you can look at them for 5 minutes and they either grab you or they don’t, and that’s it. Sure, you can muscle through any movie you want and maybe like a thing after it’s done—the art can ‘win you over’ so to speak—but is it really the art winning you over? Usually it’s just that you like the story told, so you forgive the art aspects that you don’t like, and trudge through the art each time you rewatch it, because you love the story. I think liking or not liking the art of a film is very intuitive. You can’t force yourself to like it. Either it taps into some unexplainable part of you or it doesn’t. Antichrist just doesn’t do it for me, man. And I don’t wanna have to trudge through the whole damn thing just to somewhat like a story and temporarily forget that I hated the flourishes. There are so many movies out there that I’d love start to finish, that I still haven’t seen. My time is worth my time.