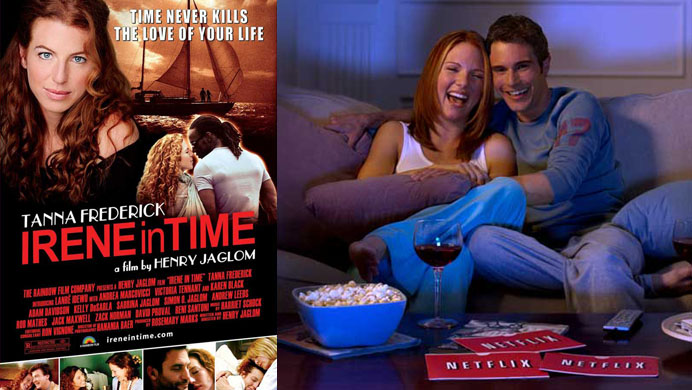 But Netflix has changed all that, and I say good riddance. All Netflix really does is add convenience to the already established video store mechanism. Now you don’t even have to leave the house. You can snuggle on the couch with your lover and your Roku box and browse what’s currently streaming (and I suspect, in a decade or so, everything will be).

Netflix is what video stores used to be when they were at their best.  It’s hard to believe, but video stores used to actually have a wide variety of movies to rent.  Nowadays it’s just new releases, video games, TV shows, and a pathetic shelf of shitty horror films and “classics” like In Her Shoes.  The classics section used to mean classics—movies from before 1970 or so.  And there used to be a documentary section where you could actually rent documentaries, not a ‘special interest’ rack inexplicably filled with both workout videos and March of the Penguins.  Netflix has eagerly picked up where video stores left off, and they’re providing young cinephiles the opportunity to explore the way we used to be able to—and you no longer need a drivers license or a bike, to boot!

I love movies. I love that they exist and that Netflix has a little of everything to offer, from new releases to obscure documentaries to the original King Kong.  But, in short rebut to a fellow smugster’s article, I will quickly say I think it’s insane to finish most movies.  Movies were not made to be finished, they were made to be watched, and if they aren’t good enough to be watched, then you’re doing yourself an excruciating disservice by finishing them.  On a given night, I’ll turn off ten movies on Netflix.

Some bad movies are worth watching though, to laugh at and stare in utter disbelief at.  They can be a fun endurance test.  A few years ago, my old roommate Patrick and I actually made up a game for watching bad movies on Netflix.  You type in a random phrase like “fish pike bakery” and then have to watch the first thing available for streaming that comes up.  This rendered some really fun viewings of some of the worst movies ever made.  There was Wendy and Lucy, the Michelle Williams buddy movie where she drearily meanders around a small town with her dog.  We particularly loved the scene in the beginning where she’s at a campfire and a guy says “don’t tell Old Man Brutus that I’m here”.  We never see that guy, or Old Man Brutus, for the entire rest of the movie, making the line 100% meaningless and useless.  There was Love Conquers Paul, Freezer Burn, and some movie I forget the name of where a girl that doesn’t know how to drive steals a car in Manhattan with a skinny guy and they drive it to Boston—and that’s it.  Oh, and it opened with a ping pong scene.

My favorite discovery was a director named Henry Jaglom, who apparently is somewhat well-regarded—at least enough to warrant a self-congratulatory, pompous, and boring documentary heralding his ‘genius’.  I stumbled upon a movie of his called Irene in Time, one of the worst, most inept movies I’ve ever seen.  Not just bad, weird bad.  It’s not bad like a silly horror movie or Plan 9 From Outer Space, but more in the way that all the shots are framed oddly, and the camera moves oddly, and the main character acts oddly.  She sings a really annoying song called “I’m Dancing With My Father” and a really weird one about Starbucks.  The whole movie is just this woman, Irene, acting weird and talking, annoyingly, about her daddy.  And this isn’t some shot on shitty video, handheld, bullshit thing.  It’s a clean 35mm print by a guy who’s supposed to be something.  His other movies suck just as bad. I know because I saw them—on Netflix!

My friend Mark and I discovered The Controller, a really odd video game movie about a group of bad actors who have to go into a video game together to do something.  This is one of those out of touch movies made for kids by adults who think video games are cool and don’t realize you can’t just have shots with way too much head room and bottles of Mountain Dew in your movie.

They aren’t all bad, although the only redeeming discovery I can think of right now was the Beyonce vehicle Obsessed which I actually thought was a genuinely good femme fatale thriller. But the aforementioned Mark and I were also able to see Heartbeeps, the kinda cute, semi-obscure Andy Kaufman robot movie from 1981. You can’t rent that at Family Video these days!

My friend Nick made one of the discoveries of the century with A Talking Cat!?!.  Netflix actually suggested this one to him—I like to think their algorithms for recommendation somehow knew he’d like it ironically.  I wrote about A Talking Cat!? in the Smug Film 2013 Oscars post.  And if you’re bored on Netflix one night, definitely check out my buddies Nick and Joe’s great little doc, Dirty Country:

Netflix also taught me that not all Kirby Dick movies are terrible, when I found Private Practices, a mid 80s, VHS-shot, fly on the wall documentary chronicling the work of a very hands on sex therapist.  That same night I was pleasantly surprised by an origami documentary that featured a “Bear Biologist/Paper Folder”, or so it said on his lower third.  At first it was pretty blah but I became mesmerized by the meticulous and detailed origami shapes they were making.  Similar to Rivers and Tides, it explored the beauty and creativity of the art form without being pretentious.  If only I could remember what it was called.

One night, I turned on something called Rid of Me and was hooked after the opening scene which featured an aloof woman wiping her period blood all over another woman’s face in a supermarket.

My girlfriend and I enjoyed (and I use that word facetiously) a movie called American Animal.  That movie gives new meaning to the word pretentious.  It’s in the upper echelon of pretension.  If you ever needed to define pretentiousness for somebody, just differ them to American Animal.

Then I made her suffer through all 36 episodes of Diablo Cody and Steven Spielberg’s god-awful United States of Tara.  The characters talk like they’re in a Diablo Cody script (because they are) which means that everyone is equally witty and equally knowledgable of all obscure and highbrow art.  So both the blue collar factor worker and gay intellectual will make Captain Beefheart quips and pontificate ‘cleverly’ about abortions or dildos or something else ‘really inappropriate’.  Chelsea is convinced I liked the show because I made us watch all of it.  But it was there, and who can’t stare at a train wreck!?

Documentaries are my favorite though because you get the ineptitude commonly found in ”indies”, but with a point of view.  Michael Moore Hates America is a pretty good movie and a decent inditement on its subject.  But, Michael Moore Hates America isn’t the only Michael Moore criticism piece, there’s a bunch more, and none are as realized or interesting as the aforementioned.  Liberals love to churn out this junk, too.  There’s Outfoxed and Bush’s Brain and about a million ones on food, from Vegucated to King Corn to Food Inc.  My personal favorite is Fat Head, which is a companion piece to Super Size Me.  Although Super Size Me sucks, it’s at least well put together.  Fat Head is a bunch of cluelessly overlong voice over passages that sound like they were recorded in a bathroom, met on screen with the shittiest computer animations you’ve ever seen.  Some of the information is interesting, and even kind of compelling, but the execution is so pathetically poor it’s hard to tell.

The truth is, movies are bad.  There’s about a million that exist and fifty that are any good.  The slop that lines the digital shelves of Netflix is proof positive of this.  And Netflix itself is an extremely interesting window into the filmmaking Zeitgeist (or the movie Zeitgeist, which sucks)!

I don’t understand how these movies get funded, how they get distribution, or really, how anybody comes up with them in the first place.  The weirdest part to me though is the fact that somebody writes this idea down, gives it to somebody else, and they read it and like it enough to participate in some way, from performing in it to paying for it.  It’s hard to believe, but somehow, it happens.  A lot.  And they’re all on Netflix!

As my fellow smugster Cody keenly pointed out, the benchmark for ‘making it’ used to be a review from the late Roger Ebert.  With that no longer possible, I like to think it’s now about having your movie on Netflix, nestled somewhere between Trucker and All About Eve.  So far I’m associated with two movies on Netflix: I was assistant editor, 2nd AC, and even an extra in Divergence, and my first ever job in NYC back in 2005 was to design the DVD artwork and edit the special feature documentaries for a movie called Brooklyn Bound, which has an appearance by Dean Winters, whom I love from his role on HBO’s Oz (and you may know him as the Mayhem guy in the Allstate commercials). At the Brooklyn Bound DVD release party he said that I, and my three cohorts, “do good work”.

But I digress. When the day comes that I do get a movie on Netflix, and I hope that day is soon, I will surely cry.  Because then online assholes like me can review them and tell me how inept, shallow, and terrible I am.  And then I’ll know I’ll have truly made it.

2 thoughts on “Nights On Netflix: A Journey Through The Aisles Of Our Friendly Neighborhood Internet Video Store”