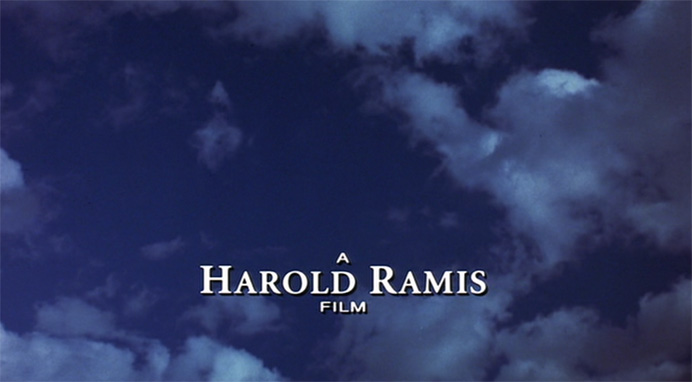 And Ghostbusters isn’t even his best movie.

On the commentary for Groundhog Day, Ramis talks about how he fought with Bill Murray about it.  Bill wanted it to be more philosophical.  Ramis understood that the philosophy should be there, but it should be in the subtext—make it as a comedy, but with the philosophy underneath, guiding the tone.  That is how you craft a perfect tone like Groundhog Day has—a movie that deftly walks the line between sweet Hollywood romantic comedy and subversive art film.  Bill Murray is a genius, don’t get me wrong—but, so was Harold Ramis.

Harold Ramis was in the upper echelon of artists, of which there may be only about 25 or 50 ever—I’m talking about everyone from athletes to musicians to painters to filmmakers.  The guy had a hand in, or created, quite literally some of the best material ever.  I say that without the slightest hint of irony or hesitation.  Ghostbusters and Groundhog Day are two of the dozen or so best movies ever made.

Ramis started at Playboy Magazine, and was one of those early National Lampoon, Second City guys out of Chicago.  These are the guys that transformed comedy from The Three Stooges into the alternative comedy we have today.  In 1980, he directed Caddyshack, the uneven classic that helped change what a comedy movie could and should be.  Caddyshack was originally going to be about Danny Noonan—and you’re saying ‘who the fuck is that’ because all you remember from Caddyshack are the transcendent moments where Ramis let the movie be what it should be.  Danny Noonan is the red-headed kid protagonist of Caddyshack, but when Ramis looked around and saw Bill Murray, Chevy Chase, Ted Knight, and Rodney Dangerfield, he realized that instead of a boring story about Danny Noonan, he could let those guys run amuck and create moments of genius.  To call Caddyshack the most quotable movie of all time is a slight overstatement, but it did warrant a Saturday Night Live sketch premised soley on quoting Caddyshack.

My favorite parts of Caddyshack were always the oddest—the moments where it became obvious that Ramis was letting everyone have fun.  I particularly love the old man who golfs through a rainstorm while maniacally cheering over having the best putting of his life—only to be struck by lightning.  It has nothing to do with the story, and displays a total artistic freedom in a way the cinema had never seen.

On the whole though, Caddyshack is probably overrated.  However, what’s remarkable is that Ramis was able to create a new tone in filmmaking, where the story is secondary to the movie’s lapses into brilliant mania.  Many of the scenes with Bill Murray mean nothing to the ‘story’, but the story is just the rhythm, and those scenes are the jazz-like riffs upon it.  This style of filmmaking had been percolating at the time, but was truly mastered and solidified by Ramis.  What’s funny is that two years before, John Landis had attempted the same thing with Ramis’ script for Animal House, but fell short, making a quite forgettable movie.

What’s amazing to me is the stark difference between Caddyshack and Groundhog Day.  Groundhog Day is a tight story with no room for lapses, which means Bill Murray must fit his brilliance into a box.  But by doing so, he appears even more brilliant for the fact that he hits all of the right emotional beats inside a story, while still being himself.  That’s what makes him a movie star and not just a comedic actor.  Groundhog Day is truly the seminal work of Bill’s career, and it was all shaped by the caring and craftsmanlike eye of Harold Ramis.

It was that same eye that took the bizarre and unwieldy script for Ghostbusters—written by Dan Aykroyd as a John Belushi vehicle set in the future—and worked it into genius.  But with all of these works, I don’t want to discredit Ramis’s collaborators.  From Murray to Aykroyd to Reitman—and Danny Rubin, who he co-wrote Groundhog Day with—it certainly took a community to make these films, which is proof positive that filmmaking is the ultimate blend of committee and auteurism.

I could go on and on about his films, and maybe someday I will—about the underseen and underappreciated Bedazzled remake, and Multiplicity, and the fact that he fuckin’ directed National Lampoon’s Vacation, and was awesome in Orange County.  It’s such a rich body of work that trying to tackle it all in a rush just to talk about the guy would be a huge disservice.

Instead, I want to talk about the mushy stuff.  When I was a little kid, my mom showed me Ghostbusters, because she grew up with those guys on Saturday Night Live.  She was a fan of SCTV and SNL and wanted to share that with her son.  I watched, wide eyed, as this peculiar band of characters interacted with each other.  This was different than a normal movie—these guys seemed like they really knew each other, like they had a history together.  But at the same time, it didn’t feel insular—there was nothing foreign about it, nothing distancing.  You felt included.  And at every turn in the story, the next thing that happened made sense—and the weirder it got, weirdly enough, the more it made sense.  When you’re a kid, you don’t consider the work that goes into that—the sensibility, the writing, the performance, the compositions, the editing.  You don’t understand how these things work together to transfix you into a mesmerized state of wonder—you just know that you’ve watched the tape twenty times in a row and now have to adjust the tracking.

Igon is a part of my life the same way former pets are, or close friends.  He’s someone I think about a lot, and quote, and feel like I know intimately.  When that person dies, it’s a very bizarre wakeup call.  It’s a reminder that art lives and people die, and that the man—whom I know almost nothing about as a person but did all these great things I love—has died.  And all I can do is hope he had a good life, hope his family is okay, and celebrate his life by watching his movies.

Harold Ramis touched and shaped my life closely from afar.  He helped teach me what art is, and how it works.  He made me feel impressed, and in awe, and thoughtful.  And most of all, he made me laugh.

I’ll leave you with one last thing.  When I was ten years old, I saw As Good As it Gets with my mom in the theater because I have a cool mom.  I loved it, because it made me feel like an adult—it’s two hours of people talking, and it’s dramatic and funny in a different way than a kid is used to.  To this day, it holds up—I think it’s the best James L. Brooks movie.

In it, there’s a small, pivotal scene where Nicholson’s character brings a doctor for Helen Hunt’s kid—a doctor who makes a house call and kind of saves the day.  In the story, it’s a very meaningful turn, a real plot fulcrum for other things to come.  The doctor is only in one scene, a very small role, but the actor has to command a lot.  Harold Ramis plays the doctor, and there is nobody on earth that I can think of that could’ve make my ten-year-old mind in that theater feel more warm and safe.  He was no longer Igon, he was older and more round, and he didn’t feel like Igon, either—he felt like a warm, caring, intelligent person.  He was perfectly cast.

I love you, Harold Ramis.  Goodbye.