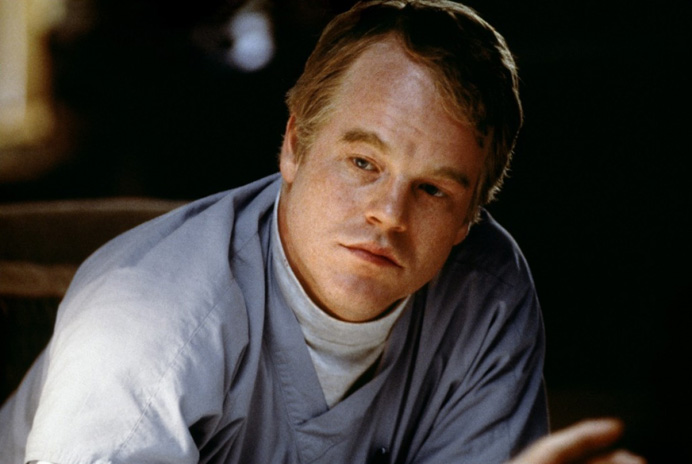 I’d say I ‘miss’ him, but I never knew his mortal self. I only ever knew his timeless self, which will be here as long as cinema—which is to say, forever. Everything good about this man is immortal. Everything bad, I never encountered, and will never encounter. My heart goes out to his family, who I’m sure have been struggling with his two selves for some time. I hope they are able to find peace as well.

Magnolia is the first Paul Thomas Anderson movie I ever saw, and in it was the first Philip Seymour Hoffman performance I ever saw. He and everything else in that movie blew me away. It instantly became my favorite film—my first favorite film that was a ‘serious’ film. Up until that point, I was way more into comedies—Tommy Boy, What About Bob?, and Wayne’s World being my top three. Magnolia sparked my foray into denser territory, which isn’t to say I suddenly dismissed lighter fare—I just wasn’t obsessed with it anymore. P.T. Anderson, David Lynch, Wes Anderson—these guys became my obsessions (replacing Farley, Murray, Myers) and are absolutely the reason I started writing screenplays.

Every screenwriter hopes that one day an actor such as Philip Seymour Hoffman will grace their words with their delivery. It’s a sign of ‘making it’, much like having a film of yours reviewed by Roger Ebert was, which I wrote about in my eulogy to him last year. As these important icons pass, we realize that we never really needed these benchmarks to happen—we just needed the idea of them happening, to motivate us. A crucial part of our journey, but not a necessary part of our destination—not literally, at least.

I feel as though I have worked with Philip Seymour Hoffman, in that I have worked with actors I adored working with, who have brought life to lines I’ve written in ways that feel wholly natural and spontaneous, yet are full of invisible, instantaneous, perfect calculation. So I have reached my destination. And that’s a beautiful feeling. But it’s also a sobering one, because I don’t ‘feel’ different. I still feel like me. But quoth the late great John Candy in Planes, Trains, and Automobiles, “I like me.” So I’m happy with that. Not everyone feels that way about themselves though, and for them, success can be difficult to deal with.

I get the sense that that was part of what lead to Philip Seymour Hoffman’s demise. He was so phenomenally talented at portraying deeply troubled characters, and achieved great success doing so—success that, in his dreams, I’m sure he assumed he would achieve after he’d fully conquered his own demons. But that’s not how life works. It’s not always so linear. Like a great movie, it can be quite dense, and layered, and not black and white, but grey.

In the end, life imitated art. One of the undisputed kings at being tragic characters died tragically. If it were a movie, we’d be applauding it. We’d give him an award. Instead, we’re trapped in the reality of it all, forced to mourn, forced to deeply feel, our hearts forced fully open—an actor’s ultimate wish for their audience. A bittersweet wish.

Philip Seymour Hoffman, we love you.