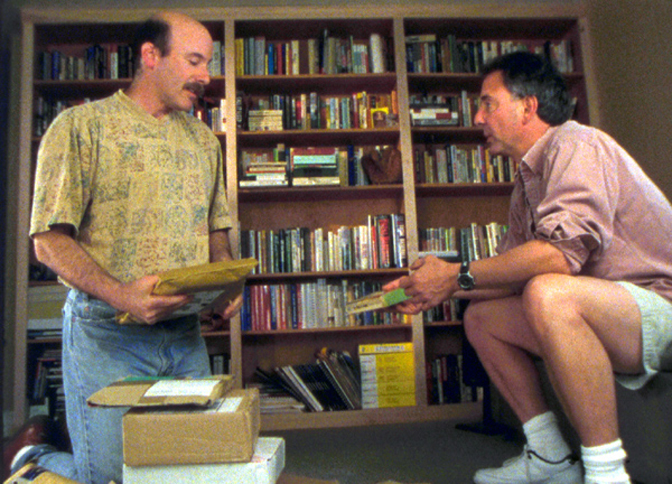 Mark Moskowitz could have easily just hired a private investigator and called it day.  Thank god he decided to make a movie rather than just find someone.

Stone Reader is a documentary about a guy who reads a book, likes it a lot, and wants to read the author’s other work.  He can’t find any, and decides to track down the author and find out why he never wrote anything else.  This may seem like a pretty thin, simple premise, but the movie transcends that.  It is literary, with a clear narrative and linearity, and it tackles an overall theme (that unfolds beautifully). Like a great novel, it also meanders—’hangs out’ and ebbs and flows.  It’s a movie made by a writer-at-heart who just happens to be a filmmaker and not an author, and a wonderful journey that you can’t help but melt into.

What’s amazing about Stone Reader is that it’s refreshingly cinematic.  However, I would bet the cinematic prowess of Mr. Moskowitz goes largely unnoticed by most viewers, as his devices are delightfully hidden under a very fluid presentation. But what could be more cinematic than that? Invisibility is the cornerstone of filmic style.  Like any great vérité work, we basically feel like we’re hanging out with the filmmaker for two hours (it is that long and completely sustains it’s length, surprisingly) but at the end, a complete story has been told.

I love the arts (despite the fact that I think most—and I really do mean most—art sucks) and I’m attracted to people with passion and creativity.  Mark is brimming with it.  Without a shred of pretension he goes on and on about the books that influenced him, shaped his life, and informed his personality and aesthetics.  He is a true reader and a lover of literature, and although I don’t share his specific passion (I don’t give a shit about Ernest Hemingway or whatever) I can have the exact same intense, adoring conversation about the Detroit Red Wings (or, the movie Stone Reader).

Mark’s love of reading is infectious and warm and it washes over you like a blanket right out of the dryer.  His filmmaking style is also just the right blend of classy and rustic.  His beautifully photographed rural home and autumn landscapes offer the perfect backdrop for his internal and external wanderings.

There’s absolutely nothing cold about Stone Reader.  Nothing harsh.  The color palette is brown, intellectual and earthy; the sound track is acoustic, searching and distant, reflecting the warming glow of a natural world that nurtures our curiosities.  Stone Reader is less a movie and more a campfire you spent building with your true love and are now snuggling in front of.  And these styles are intentional and they sneak up on you.  Moskowitz knows his subject matter, has a clear vision, and uses softness to penetrate you slowly, with ease. Stone Reader’s soft edges are sharper than any of the jagged, stylized, showpieces that modern documentarians jam into their movies with the fruitless intention of ‘spicing up’ the material, such as the animated passages of American Teen (which would be a great movie were it not for the useless CGI dramatizations of what its subjects are talking about).

In the movie, Mark talks about a novel that he once started writing and never finished.  He mentions he’s not much of a writer and that he didn’t have any stories to tell.  But someone ‘without any stories’ would’ve just hired a private eye and found the author in ten minutes.  With this movie, Mark tells a story without even knowing he was telling one.  One about how much the art we love means to us, and why.  About the joy of sharing that art with our loved ones.  Art is a beautiful thing because it is both individual and communal.  I love the things I love, and that has nothing to do with you.  But connecting with someone who loves that same thing opens up something in both of us that can’t be explained.  The last few shots of this movie express this idea so beautifully that I cry every time.

Mark has not made a movie before or since. In fact, he is a living example of the one-and-done writers he discusses so frequently in his movie.  And I suspect, like many of them, this is the ‘only one he had in him’.  What’s amazing is that on his first and only try he not only hits it out of the park but also uses several very advanced narrative devices.  For instance, the ‘time tombs’ scene, where Mark shows us film that is ”already in the movie” but not yet developed, and remarks that it’s funny how we, the viewers, have already seen the footage (by virtue of it being earlier in the movie) but he has not (by virtue of it not even being developed yet).  His depiction of ‘searching’ is also particularly well-handled—the shots of him driving are great (and, of course, wonderfully staged, since someone had to go set up the camera).  And the excerpts from NPR radio interviews he uses not only gives us further insight to the theme, but also evokes the feeling of a long road trip.

Ultimately, Mark’s most genius device is himself.  Inserting yourself into the narrative can be a dangerous gamble—you could be super annoying and lame and ruin your own movie. (Such is the case in Cropsey.)  Mark may be a tad weird, but he’s confident and driven and fun to follow around.  ‘Casting’ himself was a good idea.

With Stone Reader, Mark did the most advanced thing any filmmaker can do—he used the tools of cinema to tell a story, and he used that story to talk about a theme: reading, writing, and why books penetrate us. But, he doesn’t see himself as a filmmaker. He sees himself as a ‘reader’, primarily.

Mark just loves to read, and I truly believe that.  He doesn’t read or collect books to sound smart or to discuss them at dinner parties.  He does so because books tickle his imagination.  Stone Reader tickles mine.  Thank you, Mark, for your movie.

3 thoughts on “Stone Reader: This Review Does Not Contain Spoilers, Read It and Go Watch the Movie”