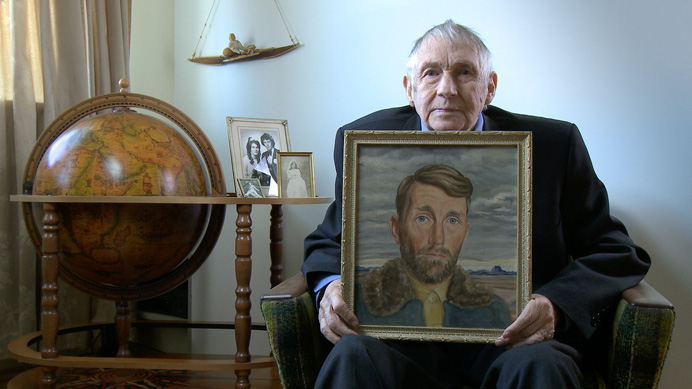 There’s a scene in this delightful film about a penis museum and the men who want their members to be immortalized in it that is so important that I shouldn’t even talk about it, but I have to, because it unintentionally has a lot to say about documentaries. Don’t worry—I’ve figured out a way to discuss it without spoiling anything.

It’s a scene where a man is describing an object he is holding, but the cameraman doesn’t make the shot about the object—he makes it about the man.  The vibe is as though suddenly, as the moment was being captured, there occurred an impromptu, telepathic, silent agreement between the cameraman and his subject about where he ought to point the lens—the shot and the expressions on the man’s face speak volumes—yet, they completely contradict the words he’s saying about the object, and what it looks like, in the few glimpses we get of it.

Because of this, the scene almost feels as though two realities are taking place on top of each other—in one, the object is how the man says it is, and in another, it’s how his face says it is. Because we are aware of both—and they are aware that we’re aware of both—the scene remains completely honest, despite itself.  And the result is one of the most emotionally layered, powerful moments I have ever seen captured on film. It singlehandedly defines, in my opinion, what it is to be a great documentary.

Great documentaries are, above all else, honest—but what makes an honest documentary?  At first glance, one might say that the scene I described seems dishonest, like the people involved were trying to hide something.  The instinct to feel this way is understandable, because there are many counterfeit documentaries out there that try to hide details from us so that we come to their own biased conclusion.  They do this through their camerawork, editing, presentation of facts, and the way they interact with their subjects. Real documentaries like this one choose what they include and exclude in a sincere way, to create an accurate-yet-poignant result, like any other good film would.  The difference between these two styles of doc can often be seen in whether or not a palpable trust exists between cameraman and subject—an unmistakable vibe of realness.

For instance, Cody’s film Rehearsals is a documentary, yet it chooses to represent its subjects solely in a visually flattering manner—if shots were unappealing, they were excluded, for the sake of the subjects and the vibe of the art.  In this way, the subjects are actually being showcased more accurately—as their true, beautiful selves, through his eyes.  As I have said before, this accuracy would not be possible were it not for the closeness he has to them, through knowing them intimately, and the trust that comes with that.

On the other end of the spectrum, Michael Moore’s films, even if you agree with their message, have a vibe of distrust.  Many of the subjects seem to shrink away from his camera—an aspect that he exploits to suggest they’re either suspicious people up to no good, or traumatized victims worthy of sympathy.  The people in counterfeit documentaries always remind me of women who’ve been told to undress under skeevy lighting in an unnatural environment—“You wanna be a star, don’tcha, baby?”.