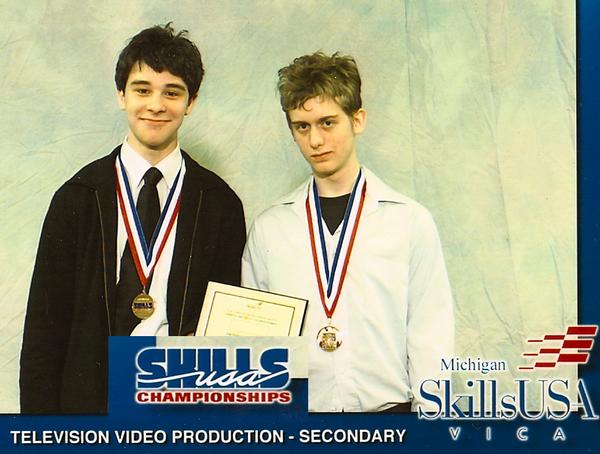 By the time we met we had each already cultivated our respective cinephile statuses.  Mine was completely traditional—my parents and grandparents are movie buffs and introduced me to all the kid-friendly classics, everything from Spielberg to Chaplin.  At around 12, I started venturing out on my own into more ‘subversive’ territory, as one does.  By the time I met Rob at 14, I was already a Kubrick, Scorsese, and Allen fanatic, and a true student of the 70’s and ‘golden age cinema’.

Rob grew up in a wildly dysfunctional Italian/Polish home with three rambunctious brothers.  Scorsese wasn’t a name, but rather ‘that guy who made Goodfellas and Casino‘, Woody Allen was a creep their parents had  sort of heard of, and Kubrick didn’t exist.  Yet, their movie collection was staggering—an entire wall shelf of sticky VHS tapes, all sans boxes, representing a greater portion of Hollywood’s output from about 1980 to 2000.  Rob’s favorites were Back to the Future, Problem Child, Go, Three O’Clock High, and Boogie Nights.  Like any cinephile, he deconstructed them endlessly.

We instantly became movie buddies, and showed each other our favorites.  He introduced me to the kinds of movies that wouldn’t be on the AFI 100 list, and I showed him the great ones that are.  It was a perfect give and take.

After high school, I moved to New York City for film school, and Rob stayed home in Detroit.  My cinephilia expanded exponentially.  By the time I was twenty, I had already been through France and their New Wave, skipped around the rest of Europe, tried some Asian, and delved head first into documentaries (slightly before they were cool I guess).

Rob was no slouch either, and basically did the same.  However, at a certain point our tastes polarized.  I think the main thing you learn after watching movies from the French New Wave is that those movies suck.  And I think you can safely apply that outlook to any genre, movement, or period because movies (or art) made solely ‘in spirit’ misses the point.  Art’s not about pushing boundaries or abstraction as a fuck you, it’s about making a good thing.  Making a good thing is often encumbered by era, technology, censorship, or pretension.  This is why Signs, Back to the Future, and Raising Arizona epitomize the best cinema has to offer.  They are made free from all those yellow barrels holding them back.  (That’s a reference to Jaws!)

Rob, however, had not really realized this yet.  He has now—but he still likes some junk, which is why he’s commissioned me to write a Cassavetes review.

Rob doesn’t know that Cassavetes is a household name in the art world.  He really knows nothing of pretension.  Shelby TWP, Michigan isn’t exactly a hotbed of art galleries and hipster chic.  Rob discovered Cassavetes on TV or something, probably late night on TCM (the channel that PT Anderson ”soaked in” before regurgitating out The Master).  Rob likes Cassavetes simply because he can relate to the themes.  Rob likes alcoholism, problems, marriage, divorce, families, and put-upon husbands.

Rob knows I don’t like Husbands.  In fact, I’d already seen much of it before he asked me to review it, or at least enough to know I don’t care to see any more.  (I have a tendency to turn movies off pretty quickly.  There will be an essay about that in the future.)  But I promised Rob I’d watch the whole thing, so I did.

I was introduced to Husbands and Cassavetes a long while back by an exuberant teacher in film school named Sal Interlandi.  I liked Sal a lot, so I wanted to like the movie (and care about Wong Kar-Wai, whom he also loved).  Unfortunately I guess, for Rob and Sal, here’s what I think about Husbands. 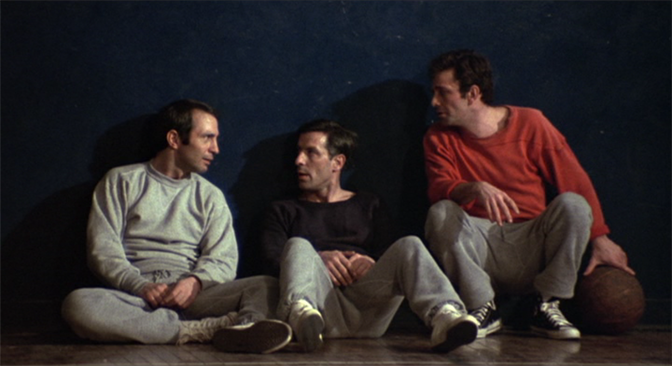 Husbands asks you to turn it off in the first five minutes because its opening is so dreadfully boring.  It’s very 70’s.  Very ‘stylistic’.  It’s a bunch of still photographs of a few ‘husbands’, I guess.

What follows is some melodramatic slop perpetrated by a filmmaker who, on his first foray, warned us, the audience, that he doesn’t know how to make movies, and that we should bear with him.  (This disclaimer literally scrolls up the screen during the opening of Shadows.)

I really do think he made up Husbands as he went along, as it’s the only explanation.  In fact, he’s probably proud of that as an idea.  He would probably say something about improvisation and freedom and how great they are. Look, I like a good improv as much as the next guy.  We all think it’s neat when we hear about one of our favorite lines being made up on the spot by a quick-witted actor, and the gracious wherewithal of a maverick director to trust him and leave it in.  But there’s a fucking scene in Husbands where the characters sit in an oddly lit black room and sing, for like 30 minutes, for no fucking reason.  (I didn’t actually look, but my guess is the scene is actually about twelve minutes.  But it feels like thirty or more.)  And I like long scenes.  I have nothing wrong with them.  The longest scene in Boogie Nights is the best one.  And the newly famous bar scene in Inglourious Basterds is literally over 30 minutes long and it’s fucking awesome.  But again, Husbands is really just a bunch of mushed together slop.  ‘Hey, I like basketball, okay, lets have a scene where we play basketball for no reason’.  As a person trying to review this movie, it’s extremely difficult, because there’s nothing to dissect.  It’s just things happening.

A common reaction to my negative reviews here is to say that “I don’t get it”.  The real problem with movies like Husbands is that I do get it—I get what they actually are, as opposed to what they are represented to be by a sect of the culture desperate to bolster nothingness in a foolish pursuit to create icons and look smart. Any explanation you could possibly give me as to the point of the goddamn basketball scene, or the singing scene, is made up.  It’s made up because in real movies, every scene has a purpose in relation to the others.  So even in something inherently experimental like Baraka or Man with a Movie Camera, you can garner an explanation for any one scene because, although it’s experimental, it adds to an overall theme that is clear and resounding.  In Husbands, and movies like it, this is not the case.  At most it’s a movie about three people walking around talking.  They’re middled aged and they drink and are friends.  It really hurts my brain struggling to come up with something intelligible to say about it.

Like any film geek, I like how low rent film stock shot in mostly natural light looks from the 70s.  I could wax on/wax off about how the grain makes it seem grittier, and more real, and blah blah blah.  However, the ‘look’ of the film is wholly accidental and just the throw-up of people who aren’t very technically proficient—either because they weren’t paid enough, didn’t care enough, or didn’t know enough.  From what I know about Cassavetes, I think the answer is all three.

The best thing Cassavetes ever did was help Scorsese by being his friend.  For that, we owe him for indirectly contributing to some great movies made by a guy who truly knows how to use a camera.  In the annals of cinema history, Cassavetes and the like are stains that champion mindlessness. Melodramatic pontificators, abstract-for-the-sake-of-being-abstract ‘artists’ that hinder the art form from exploring new, more advanced possibilities. (”That was way harsh, Ty.” – Cher, Clueless)  When movies like Husbands are liked by cinephiles, you don’t end up with the next great classic.  You end up with movements like ‘mumblecore’.  So thanks a lot.

3 thoughts on “Eventually, This Will Be a Review of the Movie ‘Husbands’ by John Cassavetes”