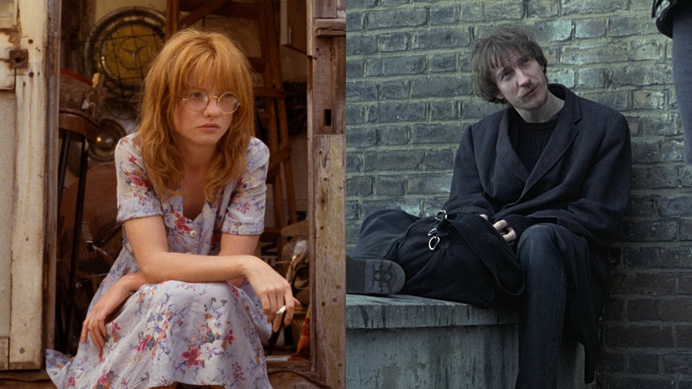 Until recently, I’d never seen a Mike Leigh film. I’ve been familiar with his name for ages, though. Back in my teens, I worked at a hip indie video store that had a ‘Directors’ section—Allen, Godard, Rohmer, Scorsese, Truffaut, Verhoeven, the list goes on. Anyone with a substantial filmography worth exploring was represented, Leigh included.

I remember being drawn to his DVD cases. Most of them were part of a box set series, and as such, followed a strict visual theme:

The simplistic design, and the colorfulness of these all next to each other on a shelf (nine in total) was enticing. I remember I’d often stop and look at them. But I never actually took the plunge and watched one. I don’t know why. I guess I was too busy rewatching Bloodsport II or Buffalo ’66.

I’m now making up for lost time, though. This past week, I watched Life is Sweet and Naked, and fell head-over-heels in love with both. They’ve instantly become two of my favorite movies ever made, and I’m now officially on a Mike Leigh kick, and will be watching everything he’s done. Expect posts in the future catching you up on my journey. But first, my reviews for these two—spoiler-free, I might add: 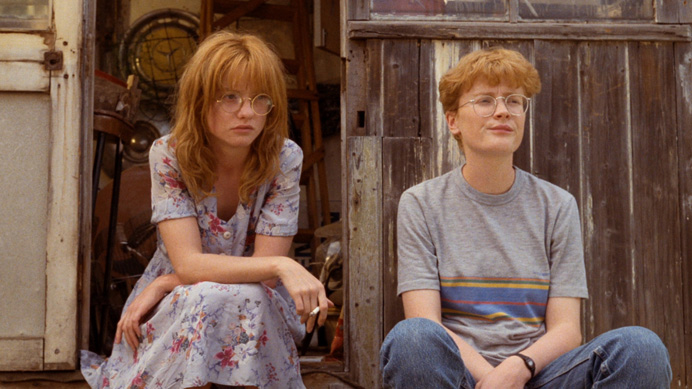 I suppose it’d be eye-roll inducing for me to say that this is a very sweet movie, but fuck you, it’s not my fault the man titled the thing perfectly. It exudes sweetness from the moment it starts and never lets up. Which isn’t to say it’s one note—on the contrary, this thing is chock full of both comedy and serious drama. It has peaks and valleys and twists and turns. Yet even when it gets dark, it’s sweetly dark, like an 80% cacao chocolate bar—bitter in a good way.

While watching this thing, you can’t help but think to yourself, ‘what can’t this guy do?’ Usually you can spot the areas outside of a writer-director’s wheelhouse—some aspect of the human condition that they avoid tackling, because they know it just ain’t their forte. A classic example of this would be Woody Allen’s notorious avoidance of nudity in his films. But a guy like Leigh, you get the sense has no such boundaries. In that sense, he’s like a funny Bertolucci. (Not that Bertolucci’s films aren’t funny from time to time, but you get what I mean.)

He’s also clearly an actor’s dream. The performances in this film are so natural that you forget you’re watching snappy dialogue. It just flows. Typically, witty repartee has a tendency to stilt itself. A writer becomes so obsessed with what reads wittily on the page that he forgets that someone has to actually say it aloud. The actors are then faced with the task of performing lines that they know are brilliant, but can’t seem to deliver with a lick of believability. They may feel as though it’s their own fault, when really, the fault lies with the words on the page.

Leigh’s words feel written aloud. This is not to say they feel improvised—on the contrary, they feel meticulous and well-chosen—but they flow like air, not ink. This gives even his zaniest characters an alarming realness. I’ve spent but a short time in England, but I recognize every character in this movie. And I don’t recognize them from there, I recognize them from here. So even if you might miss a word here or there due to unfamiliarity with their accents, you never miss the intent, the emotion, the pathos.

If you enjoy films about quirky, dysfunctional families (like Step Brothers, Napoleon Dynamite, and Little Miss Sunshine) this will definitely be up your alley. In fact, I suspect it might’ve been an influence on these, and not just because it came out over a decade earlier and is vastly superior to them. There are specific elements that seem to have been lifted, not in a plagiarism way or anything, just in a ‘hey, let’s do something like this’ way. Honorable, respectful, deferential lifting. 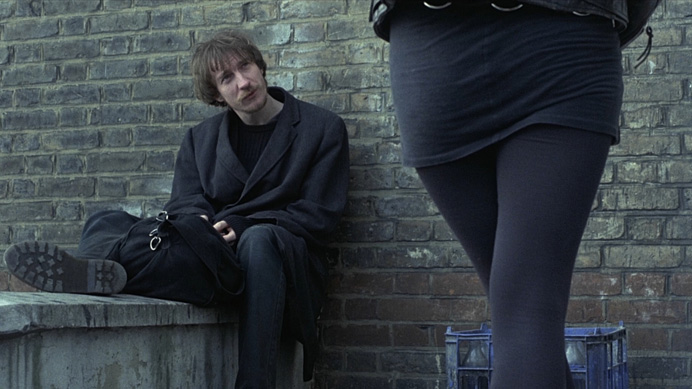 This one is significantly darker and denser than Life is Sweet—damn near 100% cacao. And if you’ve ever had chocolate that dark, you know how oddly and enjoyably intoxicating it can be.

There are jokes peppered throughout this thing, but overall, christ is it dark. You will chuckle, even laugh hard, but it’s gallows humor, there to get you through the unrelenting sociopathy on display.

It’s best to think of Naked as an urban Western. It tells the story of a not-entirely-dissimilar hero and villain, tearing through a desolate town and its inhabitants, unaware of each other for the most part, only ever encountering in small yet powerful ways. Mostly, we see how these two men deal with women, and to the untrained eye, they might seem quite alike in that department. But only one of them has a soul, and that is all the difference.

David Thewlis’ performance as the protagonist, Johnny, is one of the greatest in all of cinema. For over two hours, he is him, and the ‘he’ that he is is instantly iconic. Johnny is a character we know and have always known, yet have never met before. You know that feeling you had while reading Catcher in the Rye for the first time and meeting Holden Caulfield? Watching this movie, you will feel that again. That’s the best way I can describe it.

Apparently this film experienced a lot of backlash upon its release for its ‘treatment of women’. And yes, female characters are abused, both verbally and physically, in this film. But this accusation  of misogyny is absurd, and in fact quite ironic, because Leigh gives these actresses way more to do within their roles than most actresses ever get to do. If he were truly a misogynist, he wouldn’t have given them dense, three-dimensional characters portray—he’d have given them one-dimensional ones, and very little to do, feeling they weren’t capable of more than that. Leigh is the writer-director actresses pray their whole lives for.

If you’d like to join me in getting aboard the Mike Leigh train, definitely watch these films in the order I did, with Life is Sweet coming first. Naked is a great movie, but it’s not as gentle an entrance into his world.